The Evolution and Devolution of Humans

Just so you all know this is my first ever blog. This blog is a reference and I hope you consider this as a learning point. If I mention any suttas/sutras, do take the time to read them as they will really help in understanding the Buddha’s teachings.
Good luck!

A wheel-turning monarch? No one in this world would have any idea of what such a term means. It’s simply because a wheel-turning monarch would not even exist in a world like this. Especially when the lifespan of humans is less than 100 years! It just makes no sense to people today to have a ruler who rules a large continent or more as the world today is made up of independent states with political boundaries.

Who is a wheel-turning monarch? A wheel-turning monarch is a ruler who rules the world without a sword. He rules justly by abiding by the law or Dhamma. He has a wheel treasure and asks a man if the wheel slips from its position. If the wheel slips, the man will have to report and notify the king. In that period, there is no poverty, because the king distributes wealth to all the people. He also doesn’t have issues relating to war because he controls a large portion of the land by four quarters and all the people abide by his laws. Furthermore, the king rules by the Dhamma, meaning people have understood to harbour wholesome thoughts and practise good deeds they are aware, so that they reap good results in due time.

Interesting? Today a king would have a sword, or a royal army to protect the king. A president may not have a gun or a sword but his military personnel or body guards are there to protect him and the nation. This isn't the scenario in the era of a wheel turning monarch where fighting and hatred are unheard of and if known, they are to be curbed. That great period for humans is a period without theft, use of weapons, killing, lying, speaking ill-will of others, adultery, harsh speech, false opinions, incest, excessive greed, deviant practices, or lack of respect of elders, parents, and monks. Unfortunately, today, the world is run by rulers not by the Dhamma. If it was, the people would have one salary and no group would be well off than another. Everyone would be happy. However, today, many rulers fail to rule justly since nations depend on trade, consumption of renewable and non-renewable resources, sustenance of monetary or economic values, defense of the country from threats, and so on.

Explanation of the Suttas

I highly recommend reading the Aganna Sutta (DN, 27), Brahmajala Sutta (DN, 1), and the Cakkavatti-Sihanada Sutta (DN, 26) as they interrelate and mention how humans came into being. The Aganna sutta and Brahmajala sutta are the most interrelated as they describe the beginning of time and what the world was before humans existed. They explain what happened for humans to come into existence and provide us with details on how humans developed unwholesome and wholesome thoughts that can be reflected onto this world for us to prove that what the Buddha said was true. For instance the dependence on food lead to celestial like beings, to become coarser and less attractive while they were once independent on nutrition and self-luminous. Has anyone seen a self-luminous person today or rice that grows ready for us to eat, or a tasty mushroom that has the colour of butter and tastes like pure wild honey? 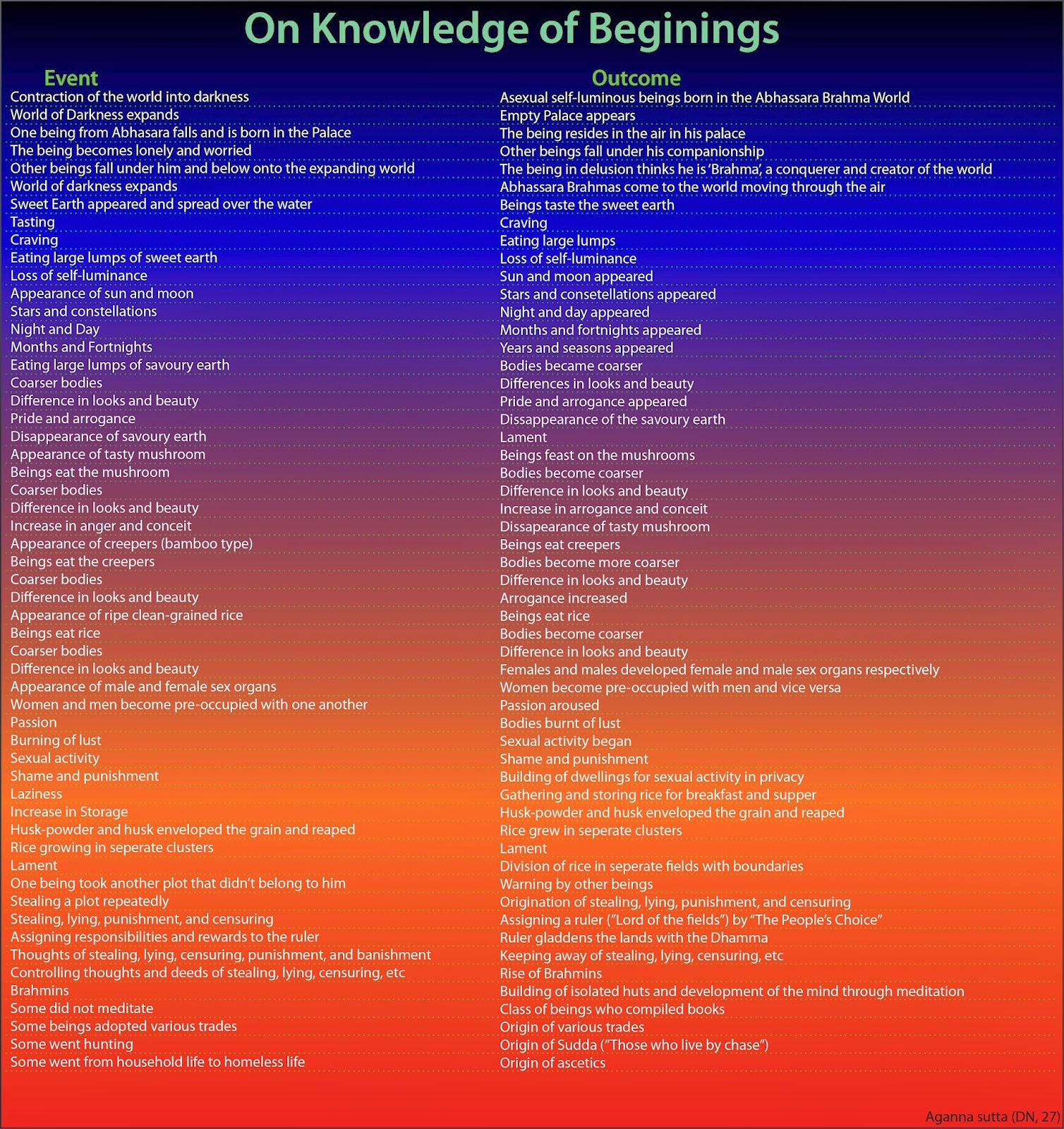 The Cakkavatti-Sihanada sutta mentions an ongoing cycle where humans once live in harmony but eventually greed, hatred and ignorance lead to humans living for shorter time-periods unlike their predecessors, and what happens when they stop killing at a time when the lifespan is only 10 years. This sutta can greatly help us reflect on the world today and help us identify and check-mark the unwholesome deeds and thoughts such as lying, killing, and adultery and understanding why us humans don’t deserve to be born in a time where the lifespan of the world is 80,000 years. Can we see theft, crime, poverty, arrogance, and incest. If we check-mark yes to all of them, then yes we do live in a time when the lifespan of us humans is less than 100 years! The sutta will help us think about ourselves and what we need to do to be better such as attaining Nibbana (Nirvana) so that we don’t continue forever living in unpleasant times. 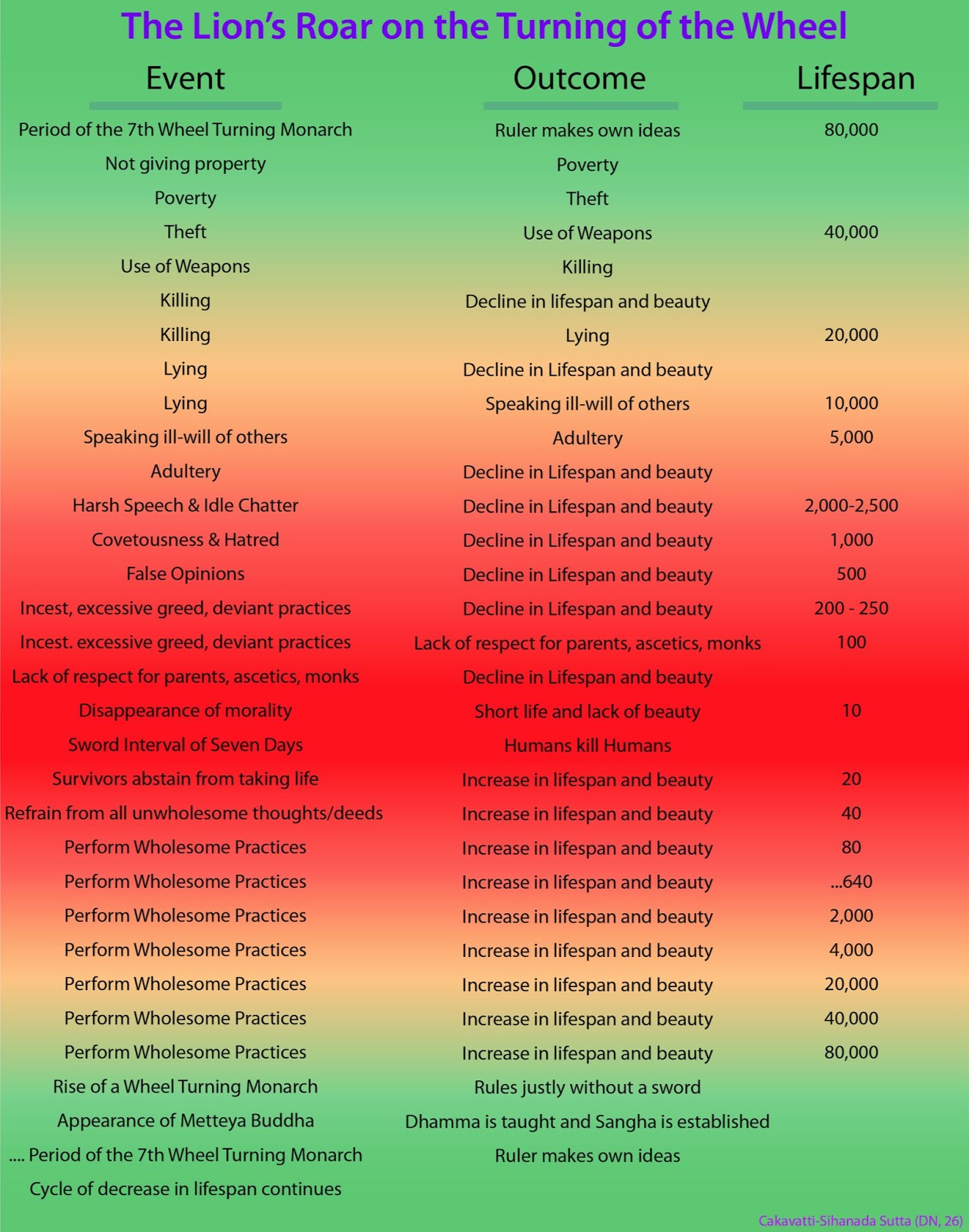 Since we live in a time when the lifespan is less than 100 years, we should think what the world could come to in the future. For instance, we highly depend on the Internet, but many of us cannot stand an Internet speed of 56k. We also watch a lot of television. Improvements in picture clarity from 720p HD to 1080p Full HD to 4K Ultra HD means we are become ever more greedy for the best picture clarity. Anything less than 1080 or 720p is going to make us angry and jealous and envious of those who own the best televisions. That was just one example. The same applies to whatever one likes be it music, cars, sports, fashion, and much more. We are also followers of the media where supposedly the most intelligent, the most beautiful, and the most prosperous are seen on TV or heard on the radio and everyone tries to become like them instead of having confidence in oneself. Today most people lack confidence in themselves since they don’t think rationally as they either depend on a celestial being or a popular idol to ensure that they are on the correct path instead of thinking about themselves, and understand how to improve themselves. One could further argue that the current state of the media and the social structures will lead to the end of the Dhamma.

The end of Buddhism

The end of the Dhamma according to the Anagata-vamsa will be as follows:

Passing away of teachings:

1. The disappearance of the attainments:


2. The disappearance of the Method:

3. The disappearance of the Learning


4. The disappearance of the symbols


5. The disappearance of the relics


The burning of the effigy will be the last day of Buddhism marking 5000 years after the Gotama Buddha’s passing away. Then on, the world leads into chaos with people soon become ever more violent as morality declines. The lifespan goes decreasing as human beings wouldn’t know the meaning of morality. That would be the worst time to be born as a human as one may know who their parents are but wouldn’t know the moral meaning of a parent and thus no one acts in a wholesome manner. The lowest lifespan is 10 years with women reaching child barring age at 5! Interestingly the sutta mentions that tastes of salt, sugar, and butter will also disappear when humans live short lives. Something not mentioned is that world population is expected to be high and crowded as everyone commits adultery and children are produced.

There comes a time when the people who live up to the age of 10 prey on other humans with swords. This is called the sword interval. A mother takes on a son, Father for daughter, father for son, brother for brother, uncle for… so on and so forth. It is going to be a bloody interval. But the population could decrease since everyone kills everyone for seven days (1 week). Nonetheless, there’s a group of humans that think killing is fruitless and it is of no use killing because they are not happy and repeatedly lament. They then go into a solitary place such as a forest and stay there until the bloodshed is over. They begin to realise the bad deeds their fellow people made and continue to unwrap  wholesome thoughts such as not killing. Later, they stop stealing, lying, sexual misconduct, and drinking. The lifespan then increases from 10 to 20 and all the way up to 80,000 years where a new wheel turning monarch rules the four quarters of the world through his Dhamma/Law. At that time there will be 3 diseases: Old age/decay, hunger/thirst, and desires.

The period of the Metteya Buddha

There is a lot of information on the Metteya Buddha on Google and it is quite an interesting subject. According to the commentaries, the Metteya Buddha will be born during a wheel turning monarch’s reign. Due to the fact that the wheel turning monarch conquers through virtue, wisdom, and righteousness in a large part of the continent, the teachings of the Metteya Buddha could spread fast in a large spatial region covering what is not just India, but also the Middle East, Northern Asia, Eastern Asia and later beyond these areas just like the Gotama Buddha’s teachings have spread over the years especially during King Asoka’s time.

Metteya Buddha will teach just the Dhamma like the Gotama Buddha excellent in the beginning, excellent in the middle, and excellent in conclusion as many beings will attain the fruits of enlightenment. However, after the Metteya Buddha’s dispensation, there comes a time (100,000 world cycles) where no Buddhas will appear. The reason for a long period could be that many have attained enlightenment and there won’t be many virtuous followers for a long time. Nonetheless, there will be an infinitude of Buddhas in the future and an infinitude of disciples; a never-ending process of evolution, and devolution; rising, and falling, it is our job to leave the never ending journey of mass madness and progress to never experience the samsaric journey of ignorance, hatred, and delusion ever again.

Last, I have included a video by Bhante Anandajoti on the Aganna Sutta and the Cakavatti-Sihanada Sutta: